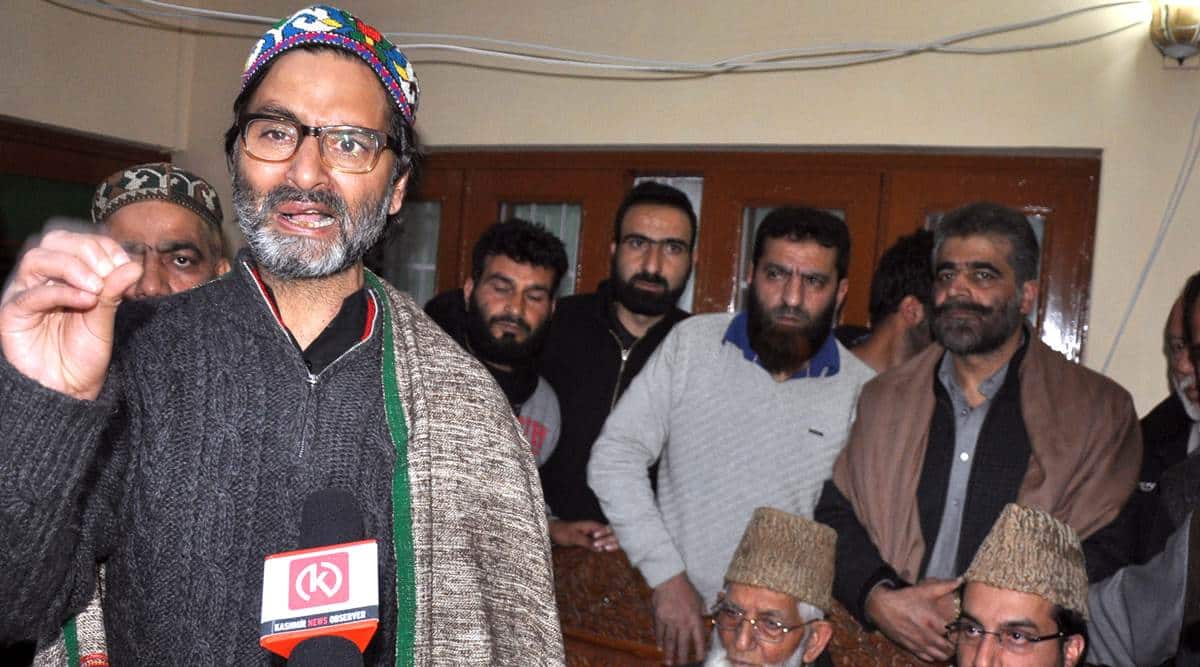 THE CENTER IS considering a ban on both the facts of the All Party Hurriyat Conference under the Unlawful Activities Prevention Act (UAPA), government sources said on Sunday. The ban will allow security agencies to arrest any office bearer for being associated with the Hurriyat, and block flow of funds.

According to sources in the Union Home Ministry, while discussions to declare both the hardline and moderate facts of the Hurriyat as “unlawful association” have started, file movement in this regard is yet to begin. The hardline faction is currently led by Ashraf Sehrai, and the moderate faction by Mirwaiz Umar Farooq.

The sources said the discussions follow evidence and intelligence provided by Jammu & Kashmir Police and central agencies such as the National Investigation Agency and the Enforcement Directorate. “A final call will be taken only at the highest level in the government,” a source said.

A decision to ban an organization is signed by the Union Home Secretary based on a comprehensive report that spells out the need for taking such action. It is later notified in the official gazette.

The sources said the government was clear that those who foment trouble in the Valley must be under relentless pressure. The decision to remove government staff with ‘separatist’ mindsets in the Union Territory, and to deny security clearance for passports or government jobs to stone throwers is in line with this idea. “We understand the Hurriyat too is facing pressure from Pakistan to do something,” a senior government official said.

Certain quarters in the security establishment, however, termed the impending move as akin to “flogging a dead horse”. “Ever since its leaders have been jailed in Delhi, Hurriyat has been practically non-functional. Even their press releases are issued from Pakistan,” an officer in a security agency, who did not wish to be identified, said.

The discussions have gained momentum days after a meeting of the J&K Police brass and the UT administration was held following the arrest of six individuals involved in a Pakistani MBBS seats racket. The probe by J&K Police had found that seats allocated to Hurriyat leaders were sold, and the money flowed into terror and secessionist activities. At that meeting too, a possible ban on the Hurriyat was discussed. A report in this regard has also been sent to MHA, sources said.

In June 2019, more than a month before Article 370 was abrogated, Union Home Minister Amit Shah had said his government was there to strike terror in the hearts of secessionists. In his first reply as Home Minister in Parliament, he had reiterated that the government had zero tolerance for terrorism, which it would wipe it out from its roots.

When Opposition members asked if the government would accept the olive branch extended by separatist leader Mirwaiz Umar Farooq indicating the Hurriyat’s readiness for talks, Shah did not address the question directly: “Those (in Kashmir) who have anti-India thoughts in their minds should fear us. We are not members of the tukde-tukde gang,” he said.

The Hurriyat Conference came into existence in 1993 with 26 groups, including some pro-Pakistan and banned outfits such as the Jamaat-e-Islami, JKLF and the Dukhtaran-e-Millat. It also included the People’s Conference and the Awami Action Committee headed by Mirwaiz Umar Farooq.

The separatist conglomerate broke into two facts in 2005 with the moderate group being led by the Mirwaiz and the hardline Tehreek-e-Hurriyat headed by Syed Ali Shah Geelani.

In 2019, the government banned the Jamaat-e-Islami and the JKLF under the UAPA. Till date, the NIA has arrested 18 separatist leaders from Kashmir including those from the Hurriyat in a case of terror funding. In February 2018, the agency filed a chargesheet in the case against 12 people, including Lashkar-e-Taiba chief Hafiz Saeed and Hizbul Mujahideen head Syed Salahuddin. The 10 people then arrested by the NIA in connection with the case included the son-in-law of Geelani, Altaf Ahmed Shah, and Kashmiri businessman Zahoor Watali.

The agency had even named Syed Ali Shah Geelani and the Mirwaiz in the chargesheet claiming they had been pushing for secession and fueling unrest, but had stopped short of naming them as accused.

The NIA has claimed in its chargesheets that the allotment of medical and engineering seats in Pakistani colleges is a major racket that feeds anti-India forces in Kashmir.

NIA has maintained that the system of recommending students through Hurriyat leaders in Pakistan colleges has aided Pakistan’s efforts to destabilise India.

“This shows a triangular nexus wherein the terrorists, the Hurriyat and the Pakistani establishment are the three verticals, and they are ostensibly patronizing the Kashmiri students in order to prepare a generation of doctors and technocrats in Kashmir who will have leanings towards Pakistan,” the NIA said in its chargesheet.