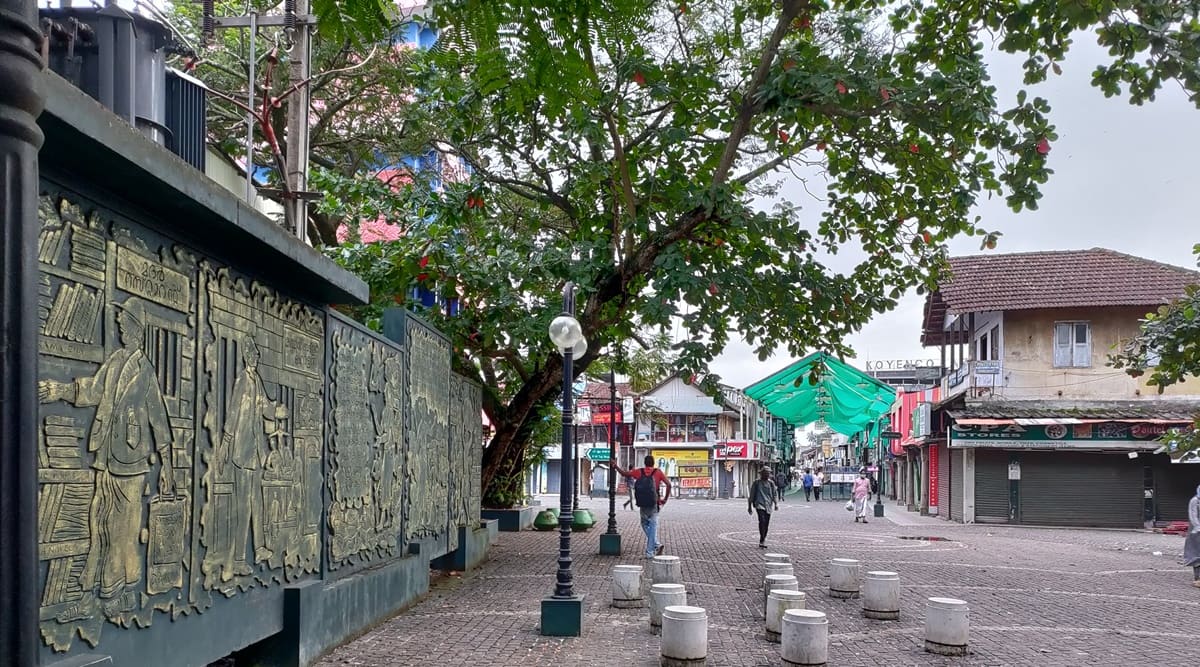 There’s a reason why press photographers in Kerala’s ancient beach town of Kozhikode rush to the fabled SM Street, locally known as Mittai Theruvu, to capture the holiday spirit during festivals like Onam, Bakrid and Vishu. The two-km-long cobbled street in the heart of the city with shops flanking either side, sells everything from clothes, footwear, clocks to coir products, handicrafts and the very popular halwa in all sorts of colours. As thousands cram onto the street, from solo shoppers to couples and large families, a photographer is guaranteed the perfect holiday picture. And they almost always appear on the front-pages of newspapers the next day.

The flip-side to that is during times of uncertainty and upheaval, SM street attracts attention and controversy first. Free publicity during good times comes at a cost, admitted Navas Koyissery, the local president of the Kerala Vyapari Vyavasayi Samithi, an influential traders’ body in the state.

During the complete lockdown imposed by the state government to combat the second wave and a slew of tight restrictions in June and July, when covid-19 infections dipped a bit only to rise again, SM Street came under heavy scrutiny of the police and the district administration. For weeks, the CPM-led government tested out a policy, that several experts called scientifically flawed, of placing areas under lockdown according to the weekly test positivity rate of the local body they fell under. As a result, SM Street, which falls under the densely-populated Kozhikode Corporation, often did not satisfy the rules for opening up and shops there remained shuttered for days on end. For the city’s residents, the sight of their beloved SM Street without its usual mix of traders, buyers and passersby was moving.

On July 12, the traders of SM Street exploded in protest and gathered in large numbers, shouting anti-government slogans. They questioned the duplicity of the restrictions — why shops selling essential items, bakeries and retail liquor outlets were allowed while rest of the establishments had to remain shut for most of the week. And how, when such establishments open once a week, they’re often overwhelmed by a barrage of customers leading to crowding and violation of protocols.

“For a trader, a customer is king. And when they come, I can’t ask them to stand for a bit outside while the others shop. If I am harsh with them, they’ll never enter my shop again. I’ll lose my business,” pointed out Koyissery, who runs a shop selling women’s clothes.

“That’s why we asked the administration to allow us to open for longer hours five days a week. This way, the flow of customers can be regulated.” 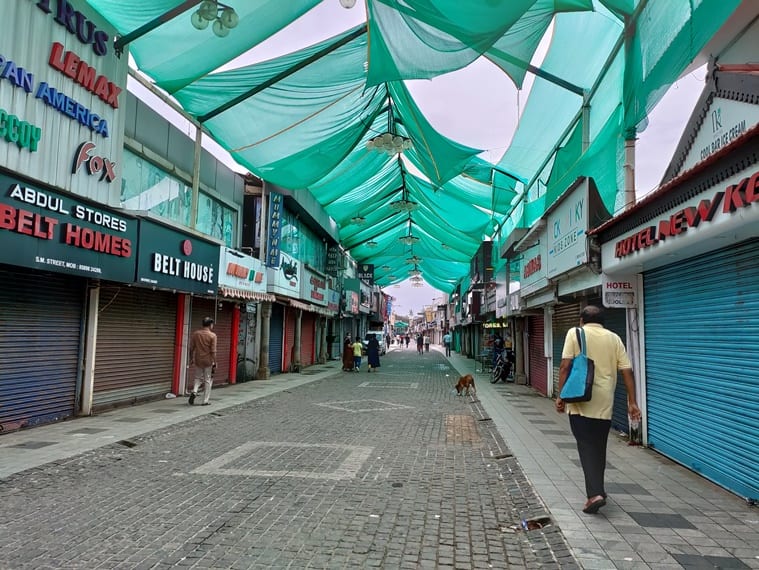 He said an earlier system, implemented during the first wave last year, of wards categorised as containment zones and micro-containment zones was perfect. Clamping down on such areas at the local level and barring the residents there to move about was successful to a large extent in checking disease transmission and deflecting any impact on retail business.

On the evening of August 4, under pressure from trade bodies, health experts and the political Opposition, the state government threw out the TPR-based lockdown mechanism, replacing it with a system based on weekly infection population ratio (WIPR). It is the number of cases reported in a week in a local body, adjusted to its population. If it’s higher than a certain threshold, the administration can place restrictions there. But the new order of the government came with a strange rider: those going to the shops must produce a vaccination certificate or an RT-PCR negative result not older than 72 hours.

A day later, the Opposition UDF was up in arms on the floor of the state Assembly. “What a travesty! A person, in order to buy a kilogram of rice for Rs 60, has to get a Covid-10 test by paying Rs 600,” mocked a Congress MLA. However, Health Minister Veena George refused to withdraw the rider, saying it was necessary to prevent crowds in shopping areas.

“It’s not practical at all,” said Binoy Varghese, who runs a shop selling antique jewelry on SM Street. “Politicians and bureaucrats frame such policies sitting in Thiruvananthapuram without taking traders like us into confidence.”

Such ill-thought rules, he said, push shoppers further away from the retail trade in Kerala into the arms of the e-commerce giants who have enormously profited from the pandemic pandemic. Varghese would know. Shortly after the first wave last year, he had to shut down his shop, unable to bear the steep loss in business, sky-high rent and staff salaries. 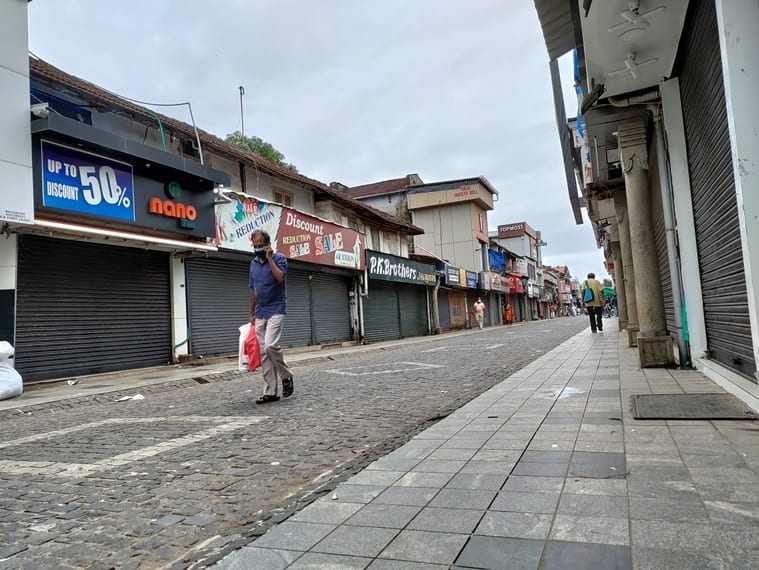 For the city’s residents, the sight of their beloved SM Street without its usual mix of traders, buyers and passersby was moving. (Express Photo by Vishnu Varma)

As he ‘did not know any other work’, he returned to business, this time with a partner to split the investment with, in February this year. And then came the second wave and two months of complete lockdown. “It was a very bad situation,” he summed up.

As weddings and other social functions are either getting postponed indefinitely or pared down to tiny rituals, the demand for jewelry has gone down. While big jewelery chains have enough capital to survive, small-timers like Varghese are fast depleting their savings. His wife, earlier a homemaker, now helps out at the shop. His younger son, just out of high school, is preparing to sit out of college this year as he understands his father won’t be able to pay a donation of Rs 2 lakh to the college he hoped to get admitted to.

“Earlier, we would build houses and buy cars from the profits of our business. Today, we are selling our homes and cars to run our business,” rued Varghese. 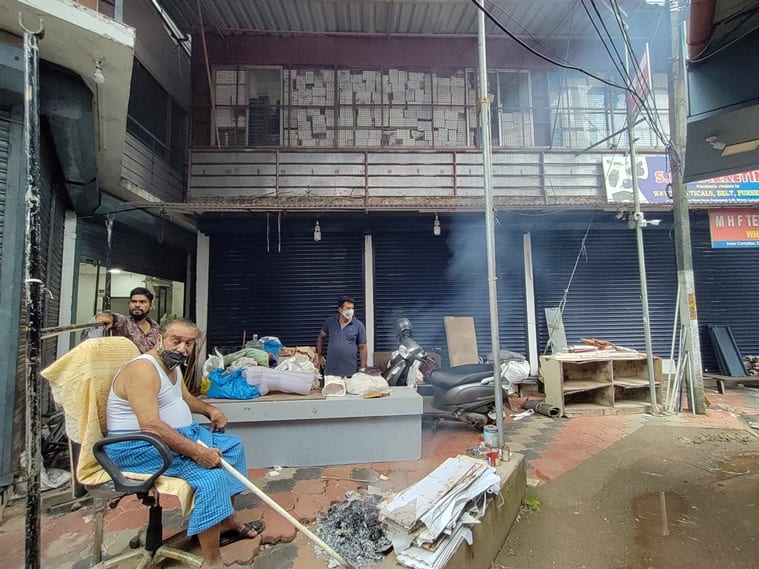 SM Street came under heavy scrutiny of the police and the district administration. (Express Photo by Vishnu Varma)

Haleel, who runs a readymade textiles shop on SM Street in a partnership, said, “Big e-commerce firms like Amazon are doing business worth crores. All of that money is going outside the country. What about us who contribute to this country by helping the money stay here? The government is not thinking right.”

Haleel had taken a loan from a co-operative bank to invest in his shop and he hasn’t been able to pay the EMIs for over six months. “They’re calling every month but I don’t know what to tell them.”

SM Street in Kozhikode, in many ways, is therefore a microcosm of the anger and desperation within the small and medium business sector in Kerala, rattled by the pandemic. If demonetisation and GST have weakened the sector considerably, the pandemic has been the severest blow of all. If other states have opened up fueled by the gradual decrease in infections there, Kerala remains an outlier with the end of the pandemic nowhere in sight. That means, restrictions, in one way or the other, are here to stay, casting a gloomy shadow over the local economy.

“Every time Kerala has faced a challenge, be it the Nipah outbreak, the floods and now the pandemic, lakhs of small and medium-scale traders have played a key role in the rebuilding process. It’s the onus of the government therefore to protect us. They must not forget it,” said Koyissery.