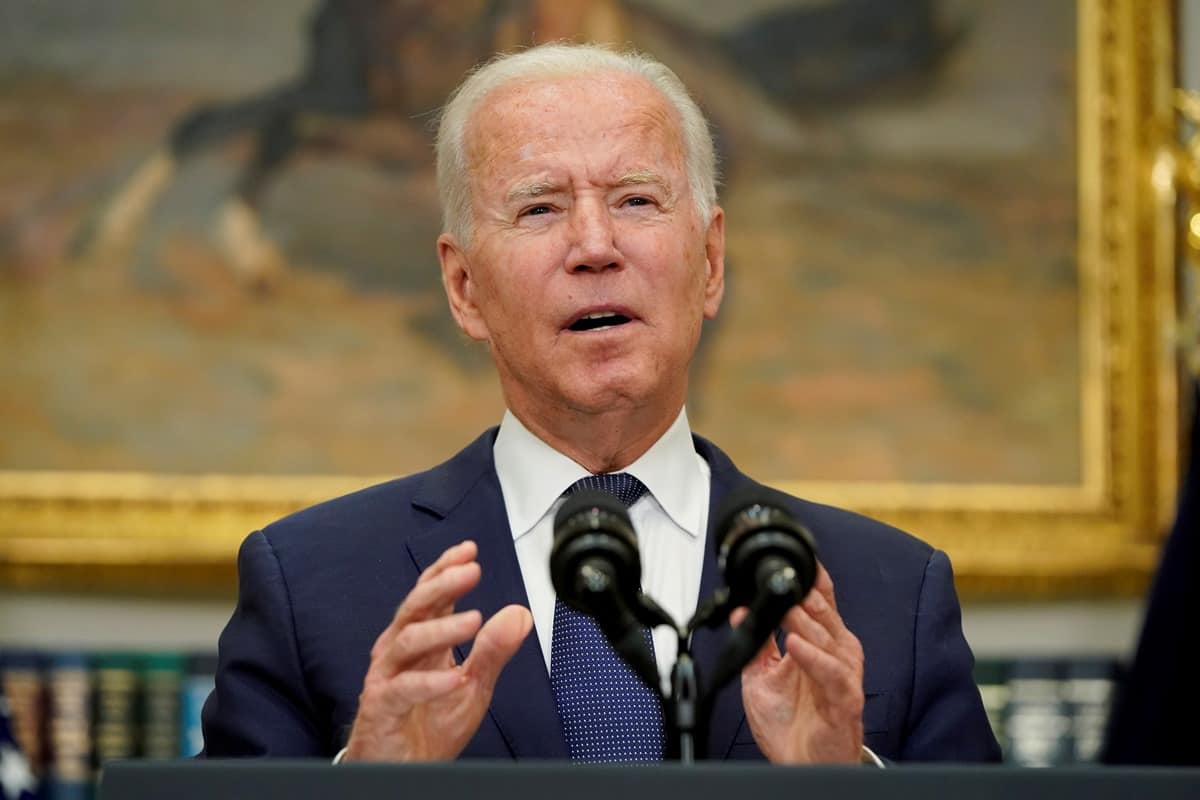 Biden said the security situation in Afghanistan was changing rapidly and his administration was under no illusions about the threat from Islamic State militants in Afghanistan known as ISIS-K (for Khorasan). The Taliban, which seized power in Afghanistan last week as the United States and its allies withdrew troops after a 20-year war, fired in the air and used batons to force people to form queues outside the airport, witnesses said. On Saturday, seven people were killed in a crush at the gates.

“Let me be clear, the evacuation of thousands from Kabul is going to be hard and painful” and would have been “no matter when it began,” Biden said in a briefing at the White House. “We have a long way to go and a lot could still go wrong,” Biden said.

Biden said he had directed the State Department to contact Americans stranded in Afghanistan by phone, email and other means, and the United States had a plan to move them to the airport. “We’re executing a plan to move groups of these Americans to safety and to safely and effectively move them to the airport compound. For security reasons, I’m not going to go into detail… but I will say again today what I’ve said before: Any American who wants to get home will get home. “Afghan allies of the West and vulnerable Afghans such as women activists and journalists would be helped too, he said.

On Sunday, there were no major injuries as gunmen beat back the crowds, according to witnesses. The Taliban had been “cooperative” about extending the airport perimeter, Biden said. Asked by a reporter whether the United States would extend an Aug. 31 deadline for evacuations, Biden replied: “Our hope is we will not have to extend but there are going to be discussions I suspect on how far along we are in the process.”

Britain’s defence ministry said seven Afghans were killed in the crush around the airport on Saturday as thousands tried to get a flight out. Sky News showed soldiers on a wall on Saturday attempting to pull the injured from the crush and spraying people with a hose to prevent them from getting dehydrated. A NATO official said at least 20 people have died in the past seven days in and around the airport. Some were shot and others died in stampedes, witnesses have said.

The United States on Sunday sought the help of six commercial airlines to transport people after their evacuation from Afghanistan. The Pentagon said it would use 18 aircraft from United Airlines, American Airlines, Delta Air and others to carry evacuees from temporary locations. Biden said people were being assisted by more than two dozen countries in four continents.

British Prime Minister Boris Johnson called a virtual meeting of leaders of the Group of Seven wealthy nations for Tuesday to “ensure safe evacuations, prevent a humanitarian crisis and support the Afghan people”. Britain plans to push world leaders to consider new sanctions on the Taliban when the G7 meets, sources told Reuters. Biden said he would support that effort, depending on the conduct of the Taliban.

Panicked Afghans have tried to board flights out of Kabul since last weekend, fearing reprisals and a return to a harsh version of Islamic law the Sunni Muslim group exercised while in power two decades ago. Leaders of the Taliban, who have sought to show a more moderate face since capturing Kabul, have begun talks on forming a government.

They face opposition from forces in northern Afghanistan, which said this weekend they had taken three districts close to the Panjshir valley. Anti-Taliban leader Ahmad Massoud said on Sunday he hoped to hold peaceful talks with the Islamist movement but that his forces in the Panjshir – remnants of army units, special forces and militiamen – were ready to fight. “We want to make the Taliban realise that the only way forward is through negotiation,” he said. “We do not want a war to break out.”

The United States and other countries including Britain have brought in several thousand troops to help evacuate foreign citizens and at-risk Afghans from Kabul, but have been careful to avoid clashes with the Taliban. A Taliban official said “we are seeking complete clarity on foreign forces’ exit plan”.

Taliban political office spokesman Mohammed Naeem told Saudi-owned Al Hadath TV that talks are ongoing with the United States and other countries. He said al Qaeda is not present in Afghanistan and the Taliban has no relationship with them.

Afghans who fled this week have spoken about their despair at leaving loved ones behind. “It was very difficult to leave,” a veiled woman told Reuters in Qatar. “I love my country.” The World Health Organisation and UN children’s agency UNICEF called for a humanitarian air bridge to deliver aid to Afghanistan to help more than 18 million people in need.

US Army Major General William Taylor said on Saturday that in the past week the United States has evacuated 17,000 people, including 2,500 Americans, from Kabul. The US had evacuated about 11,000 people in just over 30 hours, Biden said. On one of the flights, an Afghan woman gave birth on board moments after landing at Ramstein Air Base in Germany on Saturday, the US Air Force said on Twitter. The woman delivered a baby girl in the cargo bay of a C-17 aircraft. The mother and baby were in good condition, the tweet said.