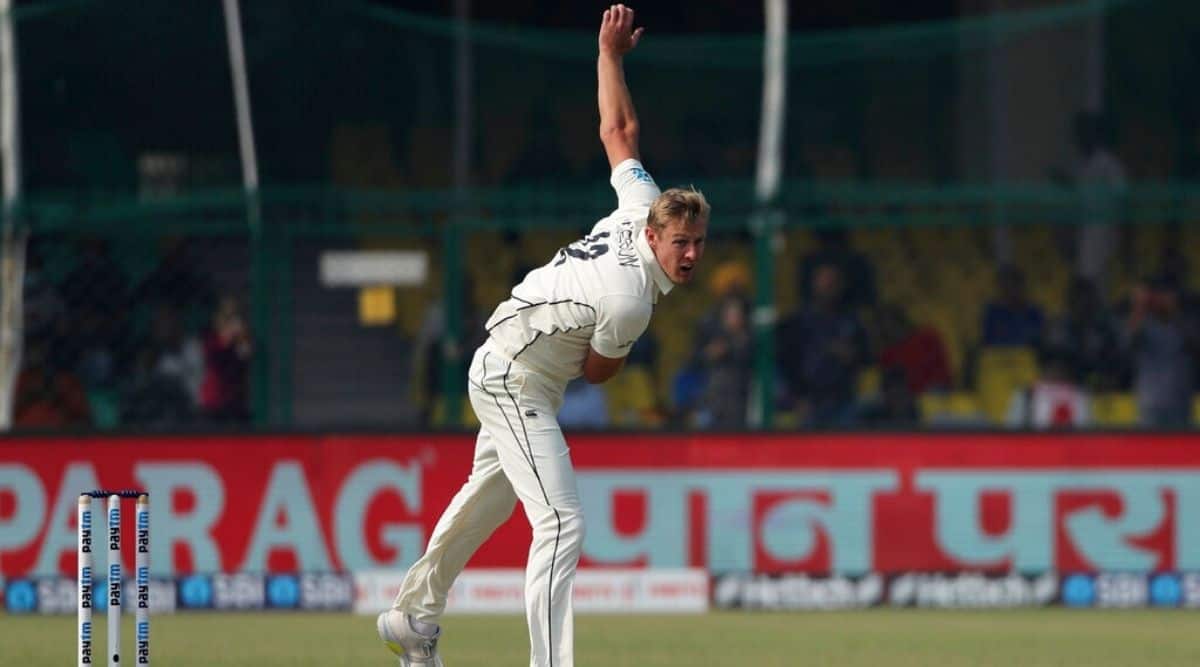 Kyle Jamieson has had a fair degree of success in four of the five Tests that he has played against India but the giant New Zealand seamer attributes a lot of it to the groundwork done by senior bowlers Trent Boult and Tim Southee.

The fastest New Zealander to reach 50 wickets (in 9 Tests), Jamieson, said that he still has a “long way to go” and “learn a lot” in terms of skills in white ball cricket.

“It’s still a long way from where I am now to where I want to be in my career. Lot of things to learn, skills in white ball cricket as I go along the way,” Jamieson said in an interaction facilitated by Amazon Prime Video, which will start streaming cricket matches live from January 1, 2022.

It has secured the rights for live streaming of New Zealand’s home matches.

“Nothing really is guaranteed with what’s coming up but I guess with cricket ahead, I have to grow my game, try and take a step back and improve my skills, and win those (ICC) tournaments in days to come,” the 6 feet 9 inch Jamieson, who has 52 wickets from 10 games, said.

With 22 wickets in five Tests against India (in the last one in Mumbai, he went wicket-less), Jamieson has given a lot of trouble to Virat Kohli and company, but the gentle Black Caps giant was humility personified when asked about the recipe for his success.

“I think I have been lucky at times and three of those five (Tests) games have been in favorable conditions. I have always maintained that I have been lucky to have come into a group where guys like Trent, Tim and Wagner have such great records over long periods of time,” he said.

“When we have played at home, we have often operated with four seamers, I have been able to get the fruits of the hardwork of the other three guys.

“It’s just that I have been lucky enough to play against India a few times in favorable conditions, and I believe, the ball has been rolled a few times in my favor also. I know that will not always be the case and there will be challenges ahead,” he sounded practical.

However, Jamieson’s match haul of six wickets on a low and slow Green Park track in Kanpur, certainly showed that he can be a handful even on unresponsive tracks with disconcerting bounce generated by his height and an ability to bowl fuller lengths with ease.

For Jamieson, it’s always tough to get into the New Zealand Test side with Boult, Southee and Wagner around and even if he wouldn’t have played, it would have been nice to just be around the group and carry drinks.

“Tim, Trent and Wagner are like leaders of this New Zealand attack for a number of years and done such a good job. For any bowler, to get into the New Zealand Test side was always going to be tough and I guess I was fortunate in a way (Waggy was having his first child during the India Test in Wellington).

“For me, I was happy to be around the group, even carry drinks, and I naturally found a role there sitting behind Tim and Trent and tried to adapt and deliver what the team needs. If its with new ball then great, even great if its with old ball. Learn and grow, and especially with those guys.”

He was a big buy during last year’s IPL when RCB paid a whopping Rs 14 crore and Jamieson is happy that he keeps the franchises interested with his skill sets.

“I guess it will be nice that people believe you have got some skills and contribute to team in whatever way possible. As cricketers, that’s what we are trying to do, win games of cricket and if people feel that you can help them in their cause, then it’s nice, for me.”

For Jamieson, at this point there are set preferences like formats or franchise cricket although he understands that in a post COVID world, the choices that one makes in order to maintain a healthy work-life balance would be important.

“What I have seen in the last two years, nobody could have foreseen and you don’t know if it would happen again. So all I would like to do is concentrate on my next series and whatever comes on from that role.

“It’s something that we have to deal with in COVID times. I have been in bubble pretty much for nine months this year and just got back home from quarantine (post India tour) and that’s something all guys need to consider moving forward. I am still learning how do you control those environment.”